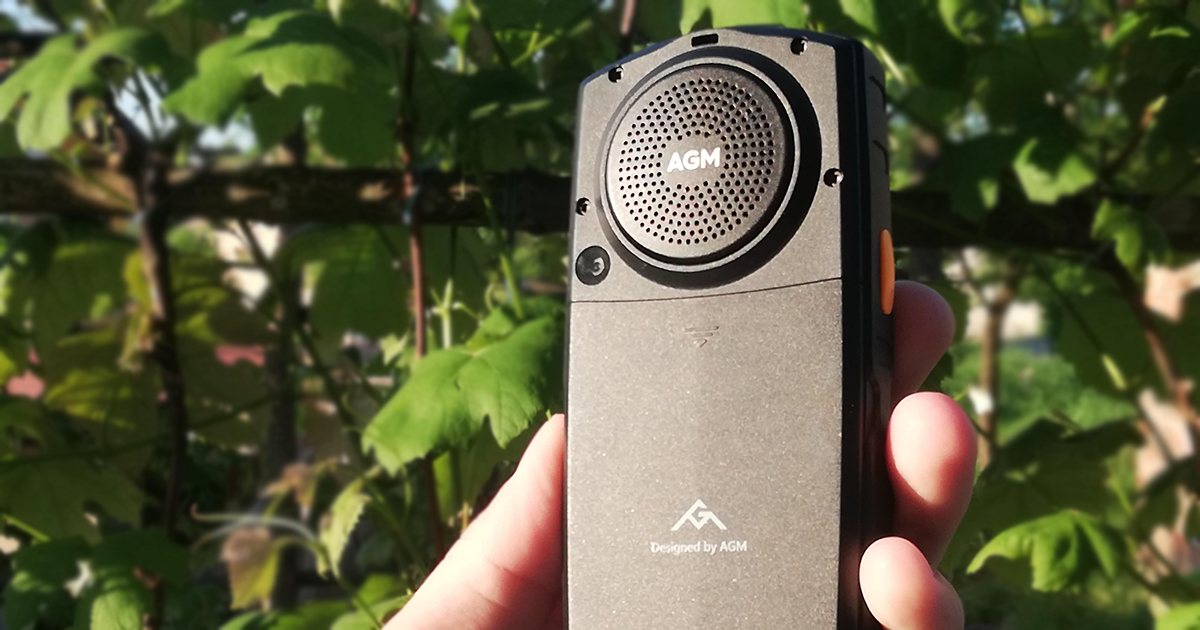 Relatively unknown brand of mobile phones, which has existed with a good reputation for many years, has recently introduced its new model M7. AGM adapted all production to more demanding users with rugged smart devices. On their latest phone, as they say, they also installed the largest speaker ever seen on this variety of products.

This phone, of course, has many other features in addition to the speaker, but let’s start from the beginning, from the box. In addition to the device, you also find a charging adapter with a USB Type-C cable, a 3.5 mm – Type-C connector for standard headphones and user manuals. There are also additional JBL Bluetooth headphones which was a real surprise, although we are not sure if these headphones come with all copies of the phone, or only with the review model.

As this robust phone is protected from many inconveniences, it was not expected to feel as light as any standard smartphone. The M7 weighs only about 180 grams as a result of the plastic used on the frame, while the edges are also made of plastic. They have slightly more rubber to absorb energy during shocks to the case. It is important to note that this phone had passed all the necessary tests and received an IP69K certificate which guarantees that water or dust will not penetrate into it. It’s not that we should try it, but it won’t hurt it if it falls off the table, or say into a puddle of water.

We’ve tested the resistance of the device by dropping it from a height of up to 2 meters, from which it got scratches on the plastic parts of the case. Also, exposing it to low temperatures in the refrigerator was not a problem, as well as washing it with water. However, when we ran over it with the car, the speaker sank into the housing a few millimeters, but all the functions remained undamaged.

There is a hotkey on the left side, whose functionality can be changed. It’s used to turn on a camera, flashlight or play music. You can even use it as a walkie-talkie via the integrated Zello application. There is another accessory that can be ordered separately via the AGM website, and that is the charging dock so that you would never have to bother connecting the phone with the cable again. How classy!

Something this AGM phone can’t boast with is its screen. This is not really a device on which to hang all day, but a partner for more demanding daily activities. The resolution on this 2.4-inch QVGA panel consists of 320 x 240 pixels, which is fine for this screen size, as long as we don’t watch videos or surf the internet on it. The colors are quite washed out, and visibility is lost when the viewing angle changes.

The brightness of the screen is also not a positive side. If you are in direct sunlight, you will have to cover it with your hand to see the content on the screen, while under normal lighting conditions everything gets fine

The screen, however, has one interesting functionality, and that is its touch sensitivity. The real combination of 2000’s symbian phone with a note of a modern device, which will be confirmed by many other features below.

Best thing on the phone is also its sale point, and that is a huge speaker that produces extremely strong tones. We can freely say that this phone can match some bluetooth speakers as well. We were honestly surprised to see this stong of a volume on the phone. Not a marketing trick, the AGM M7 actually has the strongest speaker among the phones.

AGM M7 is not a hardware intensive phone. It is powered by the MediaTek 6739 platform. This chipset is 4 years old, and was created for entry level Android devices. It consists of a quad core processor with speeds up to 1.5GHz. In this case, it is paired with 1GB of RAM as well as 8GB of storage. If these specs were present on any other phone we could say it would be a terrible idea. However, this is not the case on this device.

There is also an LED light that stands out from other phones because it is extremely strong. It’s emitting beam of light like a flashlight, but can’t be used for taking pictures.

M7 uses a simplified and customized Android 8.1 operating system. Most functions can be performed using just the keys, without touching the screen. It takes some time to get used to this phone. This is especially noticeable if you are comming from a standard “touch screen” Android. The combination of input through physical keys mixed with the touch screen is extremely confusing. It’s also an interesting feature, so you can do things on this phone in many ways. There’s also a quick menu that you can drag from the top of the screen. RAM can be purged by holding the star key.

By using it, you will notice one drawback as well. That is, there is no Play Store in the menu. AGM did not intend that you will download apps to this phone. However some of the most used ones in 2021 are pre-installed on the phone. These are Facebook, Skype, TikTok, WhatsApp and Zello we mentioned at the beginning of the review. As this is an Android-based phone, you can conclude that the modifications are in your hands. You can download .apk installation files from the Internet, and run practically anything that Android 8.1 supports. Again, keep in mind that you are limited with 8GB of internal storage, as well as a 1.5GHz processor.

Camera segment is perhaps the biggest downside of this phone. As the primary cam on its back, it uses a 2-megapixel sensor, which is somewhat bearable for this price range. The front camera, however, produces VGA quality photos which was the standard in 2000’s. Yes, we are talking about a 0.3-megapixel camera, whose images would not fill even an eighth of the FullHD screen on today’s phones.

Photos the AGM M7 takes in daylight are of low quality, with poor detail and washed out colors. Those in the dark are, literally, darkness. Phone does not have a camera flashlight. Without a strong light source, you will not be able to take a photo.

In the camera interface, in addition to the standard functions for shooting, zoom, and camera selection, there is only one option. It is the choice of image storage, phone, or SD card.

We are comming back to the positive sides of this model, and that is its connectivity options.

This is a dual-sim device, with a dedicated slot for another card. It also has an SD slot for memory expansion. There is also a 4G network connection option, with hotspot mode. Phone can also be used as a modem if there is another phone.

There is a Type-C port on the bottom of the device, which gives us the impression of a new phone. If you forget the charger elsewhere, you won’t have a problem finding the same one nearby.  Type-C is the today’s standard.

Internal components are not highly demanding on the battery. This is a small consumer with whom you will not look for a cable couple times in a day. Moreover, the M7 can last two full days with normal use. It all depends on how you use it. Phone features a 2500-milliampere battery without fast charging support.

It takes two hours and five minutes to fully charge your phone.

If you ask us, AGM has definitely made a great, and inexpensive device that directly targets its consumers. Practically indestructible and waterproof phone with a very loud speaker which you can’t miss calls with. Every worker who deals with physical and noisy jobs needs this phone. It would certainly be good to see better cameras that would round out a phone like this. However,  $99 will certainly not bring you a better rugged device.

The M7 left a generally positive impression on us. To be honest, we did not expect less from the brand that has dedicated its existence to the production of rugged phones.

You can get this phone from official AGM website, along with free shipping on all orders!