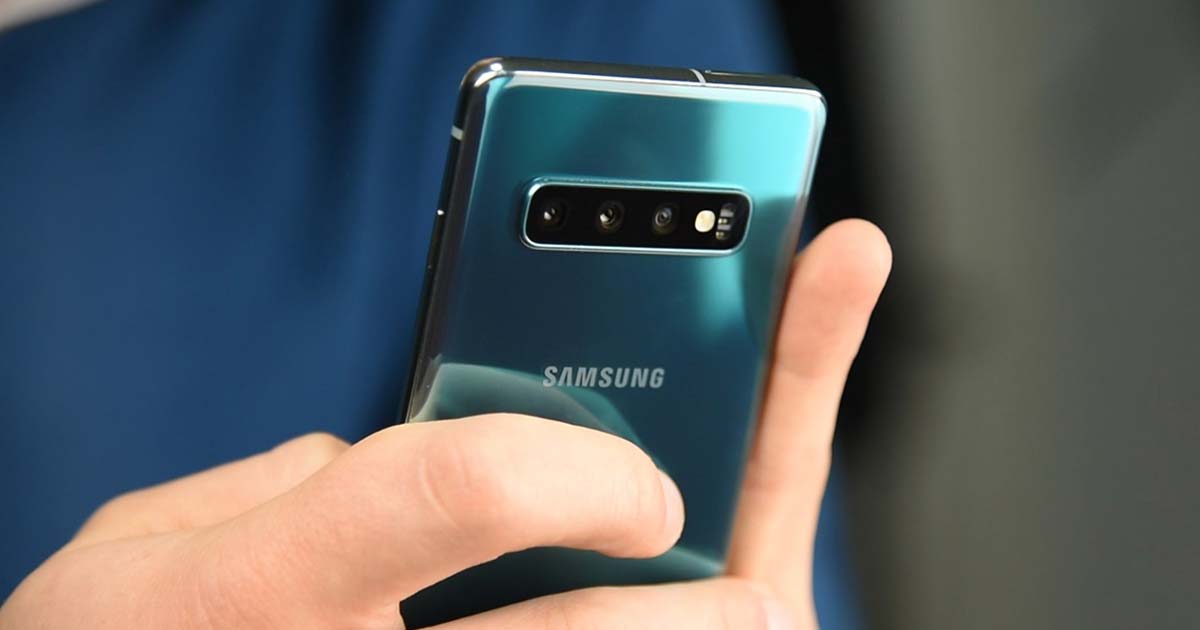 Samsung has recently released their new flagship S10 series, and now it’s our turn to review the new Galaxy S10. This is an all around phenomenal device, so stay with us to see what our opinions on this new phone is.

Before we begin with the phone itself, just like every other time, let’s take a look inside the factory box and see what Samsung has packed inside. There we have the phone itself, a SIM tray tool placed on a smaller box inside which there are user manuals, branded AKG 3.5mm in ear headphones, a USB Type-C charging and data transfer cable, a Samsung’s Adaptive Fast Charging adapter and a USB Type-A to USB Type-C converter. Quite a rich package, we must say.

Samsung Galaxy S10 is built of glass with Corning Gorilla Glass 5 protection on both front and back, and with an aluminum frame around it.

The phone that we have here came in the Prism Green color option, but also available are Prism White, Prism Black, Prism Blue, Canary Yellow and Flamingo Pink. Let’s now jump straight into the review and see what this device has to offer.

In terms of the display, the S10 has just about everything you could possibly ask for. It’s a big display at 6.1“ in diagonal, but no too big so it’s very easy to use it single-handedly. Samsung made an updated  version of their signature Super AMOLED screen, so the S10 uses the so-called Dynamic AMOLED screen. Basically, they are very similar, with one major difference being that the Dynamic AMOLED screen of the S10 is now capable of showing HDR10+ enabled content. Otherwise, this display is pretty much the same as the one found in previous Samsung flagship devices. The Galaxy S10 has a tall 19:9 aspect ratio display, and with the resolution of 1440 x 3040, you’ll only be able to conclude, just as we did, that this display is – magnificent.

Color accuracy is outstanding, and due to very slim top and bot bezels, this phone feels as it’s almost all display. Using it is just a great experience.

Also, it’s worth to mention that this is a notched display, although not in a traditional sense. This phone uses the so-called Infinity-O display, inside of which there is the front facing sensor. More about this in the camera segment.

This is an edge display as well, so all edge functionality is available on this phone too. Samsung’s signature Always On display is also hear, but it’s on pretty much all Samsung phones nowadays so it’s really not that special.

Samsung Galaxy S10 is on the cutting edge of technology in terms of the chipsets. This phone is powered by the latest and greatest Samsung built Exynos 9820 Octa chipset, which is built on an 8nm manufacturing process. In China, Latin America and the US, the S10 will come with a Snapdragon 855 chipset built-in. Still, the version we have is powered by an Exynos chip, so let’s talk about that one.

As we’ve already said, this chipset is on the cutting edge of technology, and it’s appropriately fast. No matter what you throw at it, this phone will deliver. Whether it be photo or video editing, gaming, heavy multitasking, it doesn’t matter to this beast. In gaming, for example, you’ll always have a high, stable framerate, and even though it heats up a little bit after long gaming sessions, it doesn’t really hurt the performances at all.

Memory-wise, the Galaxy S10 comes in only two memory configurations, with 8GB of RAM and either 128GB of 512GB of internal storage memory. It common to find this much RAM in many PCs nowadays, so this information is even more than welcome. On the other hand, if for some reason you’re not happy with either 128GB or 512GB of internal storage and you need more, there is a hybrid dual SIM slot that will allow you to use a microSD card and expand your storage by an additional 512GB.

Another cool thing about this phone is that, much the same as other modern smartphones, it’s IP68 rated for water and dust resistance. Feel free to use this phone around water, as long as you aren’t actively trying to drown it, it’s safe.

The phone has several biometric protection options, and we assume that most users will end up using the in-display ultrasonic fingerprint reader. It sits in a very nice, comfortable position. It does a good job, it unlocks the phone the majority of times although it does fail sometimes, but it’s not nearly as fast as you’d expect it to be.

We used face recognition during testing, however, it’s definitely not the most secure way to protect this phone. I doesn’t work like the iPhone’s FaceID that maps your face and uses that data to unlock the device, but rather captures an image of your face and compares it to the one registered. We tested this method and indeed, the phone let us in when we pointed it towards the video of ourselves. This is not the most reliable method and we can’t really recommend it to anyone.

When it comes to sound reproduction, we must say that this phone produces stereo sound since the there are two speakers blasting your way when you’re viewing videos or listening to music. The sound is crisp and plenty loud, definitely one of the best on the market.

Samsung Galaxy S10 uses Android version 9.0 Pie out of the box with Samsung’s One UI on top of it. This is the first smartphone that comes with One UI out of the box, and we must say that it’s an acquired taste. There’s a learning curve, and it takes some getting used to, but overall it’s a good system. It’s snappy, intuitive, and works really well.

We have to point out though that it’s not your normal Android experience, so if you’re looking for a stripped down version of Android, this phone won’t provide that.

When it comes to the cameras, the Galaxy S10 has quite a few of them. On the back there is triple camera setup. The main sensor brings the resolution of 12MP. If you remember the camera on the Galaxy Note9, this is one pretty much the same. It also has the variable aperture that we had in the Note9 and that goes from f/1.5 to f/2.4 on demand.

Taking advantage of the variable aperture, this phone is able to capture some really good night time shots, which are definitely some of the best on the market. This is genuinely an amazing feature and we’re really glad that Samsung has decided to stick with it in this phone as well. The second sensor has the resolution of 12MP as well, and it’s a telephoto sensor that will allow for up to 2x optical zoom.

These two sensors are both optically stabilized, which is a great addition. The third sensor is an ultra wide one and it has the resolution of 16MP. Group photos with many people are due to this camera quite easy.

All these sensors together work really good. The camera interface is quite rich, and there you can find many options to improve the quality of your photos, such as HDR, AI scene optimizer, live focus among other things. The Night mode is automatically enabled through the scene optimizer, and even though it works, it’s not worth it because it simply overexposes highlights of the photo making it more grainy compared to the photo made without the Night mode on.

Inside the Pro mode you can manually adjust pretty much all photo parameters, which will be interesting for all the photo geeks out there.

When it comes to video capturing, the Galaxy S10 is capable of capturing videos in maximum 4K resolution at 60fps, however only this resolution is not stabilized – all other resolutions including 4K at 30fps are stabilized. Dynamic videos are good, however, still videos are just excellent. It’s a pity that the Pro mode isn’t available for video capturing, but it is what it is and you’ll have to deal with it. We can only hope that Samsung will deliver it through one of the upcoming software updates.

On the front there is a single camera sensor placed inside the Infinity-O display’s punch hole. This is a 10MP wide angle sensor that captures really good selfies and does an excellent job in video calls since it provides 4K videos as well, albeit at 30fps maximum. All around this is a great camera, and the only issue with it is it’s placement – it has a weird position being placed in the upper right corner, so it’ll take some getting used to in order to take perfect selfies.

Samsung Galaxy S10 is a flagship by one of the leading manufacturers, and as such it’s only natural for it to have the best possible connectivity features on the market. That’s why this phone has almost everything. Let’s start from the bottom edge of the phone. There we have a USB Type-C port for charging and data transfer connections, and also a 3.5mm headphone adapter.

On the top edge there is a hybrid SIM tray that can house either two nano SIM cards or one SIM and one microSD card for storage expansions, as we’ve already mentioned. When it comes to wireless connections, there is the WiFi 802.11 on a dual band with WiFi Direct and hotspot modes, Bluetooth 5.0, GPS, NFC, even FM radio (in USA and Canada). We really weren’t joking when we said the phone had almost everything.

The only thing that’s missing and that’s worth mentioning is some sort of IR blaster, however, this is such a minute and irrelevant sensor that we can’t even say it’s a flaw.

The battery built inside the Galaxy S10 has the capacity of 3400 mAh. With this capacity, the phone will last a whole day, however, if you’re a heavy user, don’t expect it to last more than that. A great thing is that charging is, well, fast. The phone charges up from 0-100% in only an hour and a half, so even if you’re left with no battery, a coffee break is all that it takes to recharge the batteries, both yours as well as your phone’s.

The phone also supports fast wireless charging, and since both wired and wireless chargers output 15W of power, we believe that the charging time is the same. Anyway, battery is something you’ll forget about with this phone, no matter if you’re an average or a heavy user.

While we’re at the topic of wireless charging, we have to mention reversible wireless charging capability of this phone. It can serve as a power bank for another device, so if you, for instance, have Galaxy Buds or a Galaxy Watch, you can charge them up by simply placing them on the back of the phone. Obviously, this will drain the battery from your phone. You won’t be able to use this feature with less than 30% charge.

Samsung Galaxy S10 is one remarkable phone. At the moment there’s nothing it can’t do – it’s definitely one of the best smartphones on the market. Every part of this phone is top notch, from build quality to hardware and cameras. It’s just phenomenal, as long as you keep in mind that face unlock isn’t the most secure.

The only true flaw, if you can say so, is that this flagship comes with quite a flagship price. Officially, Samsung sells it for around 930 euros, which is not the kind of money people pay for a phone easily. Still, if you like Samsung, like to keep up with the technology and enjoy having the best of the best, this phone is the right one for you.

Also don’t forget to subscribe to our channel and press the bell icon in order to be the first to see what’s new in the mobile industry. Thanks for reading, see you next time!